It's no secret I LOVE Styx. So it's pretty amazing that in over 30 years of loving this band I've only seen them live twice. The first time was in 2011 in Colorado and the second time was last night. Both times they rocked it!

Great set list (see below.) The only two things I missed from 2011 were Chuck Panozzo (He played a couple of songs in 2011. No appearence last night) and Castle Walls. They did such an amazing job with that song in 2011 I was hoping to hear it again. Other than that I have no complaints - about the band. The venue, however...

Before I get into that, I want to mention how Tommy Shaw's daughter had a raffle for a signed guitar for the bands charity Rock to the Rescue. In April of this year the band, along with REO Speedwagon, raised money for the victims of the Boston Marathon bombing. Last night they raised money for York Center for Wildlife. Read more about Rock to the Rescue on their website rocktotherescue.net.

I also want to share this five minute video that I made of some footage I shot last night.

WARNING: It's pretty bad. I used my phone and could not get close to the stage. But I put what I did get into a single video simply to share with other fans. Enjoy!

Okay now back to the venue:

I know it's got amazing history and everyone from Zeppelin to George Carlyn have played there, but let me tell you, unless you are front and center seating sucked. It was very uncomfortable standing because chairs were so tight and awkward due to the tables. Yes I said tables. Most of the seating, with the exception of right in front of the stage, is tables and chairs so that people can eat beforehand. Nice concept, and maybe for a comedian, when you don't stand all night, that would be great. But for a band it became awkward.

The tables are so close together and our section had the left side of the tables virtually with backs to the stage. We had to turn the chairs around and butt them up against the table but then the person in front of you stands and pushes their chair back into you. Not comfortable. Especially when you have to shift to an angle to be facing the stage (click the above pic to see the tables and angle.) Everyone around us had the same complaints and again, if you stay seated, as we did for the opening act, it's not to bad. (Heads do get in the way though, because you're on flat ground.)

All and all there are better venues to see a band but for Styx I'd go just about anywhere. I will say I was surprised acoustically. The sound was very good. Food was average. (We had chicken fingers and fries.) 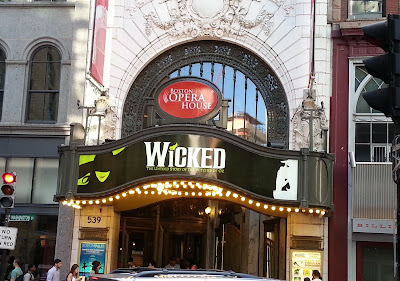 I had the pleasure of seeing Wicked in Boston this evening. I have had the soundtrack for this show since 2004. I know all the songs, the entire story and yes I have watched tons of videos on YouTube. Nothing compares to live on stage. It's magical.

Favorite songs of the night: Popular, Defying Gravity, No Good Deed and For Good.

Tonight starred Alison Luff as Elphaba and Sarah Schenkkan as Glinda. Schenkkan is the understudy but you'd never know it. She was amazing. Both women were pitch perfect and gave outstanding performances.

According to Schenkkan's Facebook page these shows in Boston will be her last. Too bad. I know, however that she won't be short on future projects.

Blasts from the past were John Davidson playing the Wizard and Kim Zimmer (was Reva on Guiding Light) as Madame Morrible. I would never have recognized Zimmer under that wig and make-up. On the other hand Davidson looked the same, simply older. I thought he did a great job and even noticed him coping the voice from the Wizard in the Wizard of Oz.

One of the great things I noticed was the amount of children in the theater. I think that's such a fantastic thing, to expose a child to the theater at a young age, and Wicked helps do that.

The themes that run through this show are wonderful for young girls. Don Aucoin from the Boston Globe wrote: "For the past decade, with wit and heart and a boatload of gorgeous tunes, Wicked has celebrated the power of female friendship. While giving full weight to the complexity of the path girls have to navigate, the show has affirmed the importance of standing up to groupthink, otherwise known as peer pressure."

It's true. Seeing the tweens seated all around me, I thought how wonderful that they'll be getting the messages that are in Wicked: A strong female friendship, putting your own opinion of yourself before others opinions of you, staying true to your moral compass, finding what makes you happy.

Composer Stephen Schwartz had this to say in an interview with the Boston Globe, "I think that the sort of empowerment of Elphaba is very inspiring. And it’s more than just to girls. I get all these e-mails from young gay male teens, and from older women, women who are in bad marriages and are affected by ‘Defying Gravity.’

“She starts as an outcast girl who wants nothing more than to fit in, and the whole first act she pursues that opportunity,’’ Schwartz noted. “But when it’s finally within her grasp, in order to take that opportunity it means selling her soul. And she won’t do it.

“While she is empowered, it’s not like ‘The Bad News Bears’ and she wins the championship and lives happily ever after. It’s very bittersweet,’’ observed Schwartz. “It’s funny to say about a green witch in ‘The Wizard of Oz,’ but there’s something realistic about how her power worked out for her. The fact that it’s not an unmitigated triumph feels real to people.

“Her courage in giving up her chance to fit in in order to stay true to what she believes is inspiring,’’ he added. “And the friendship between those two [Elphaba and Glinda] is also complicated and nuanced. That relationship speaks to girls and women.’’

I couldn't have said it better myself.

It was a wonderful evening at the theater. If you haven't seen Wicked yet, make sure you do. You won't regret it.


Photos: broadwayworld.com and Boston.Broadway.com
Posted by Kelly/Taiko at 12:34 AM 0 comments

I was going through some music for an upcoming wedding that I'll be DJing and got caught up in some great old songs: Stevie Wonder - "For Once in My life", The Beatles - "Something", Dusty Springfield - "You Don't Have to Say You Love Me", Percy Sledge - "When a Man Loves a Woman" just to name a few.

Then I came across The Osmond Brothers remake of the Temptations "I Can't Get Next To You." Now those that know me know that I was a huge Osmond fan growing up from about ages 9 through 14. Listening to this song some 30 plus years later I really enjoyed it.

I then found myself getting reacquainted with some of the other Osmond Brothers songs from the early 70's. Most people know the teeny bopper songs from Donny & Marie but the brothers wrote songs that leaned more towards rock-n-roll than teen idol. Teen idol was not what they had wanted for themselves.

In an interview with all the brothers back around 2000-2001 they spoke about how the decision to do the Donny and Marie Show ruined any potential to go back to the career that they had all wanted.
Here's that piece of that interview:


(More of the interview below)

Here are some of the songs they wrote back then:

This song tends to shock people when they find out it's the Osmonds.

This next song was also a favorite of mine. It was a huge hit in England.

This one is live.

And here's more of that interview for those of you who may be interested. It's a nice insight into the brothers. Also, they show their talented vocals and harmonies with a little impromptu vocal exercise.